Allsee Technologies are specialists in digital signage, and while the business weathered the coronavirus pandemic reasonably well, a global parts shorting is now playing havoc with future planning. Follow the company's evolving story as we check in each month to track progress and improvement efforts. 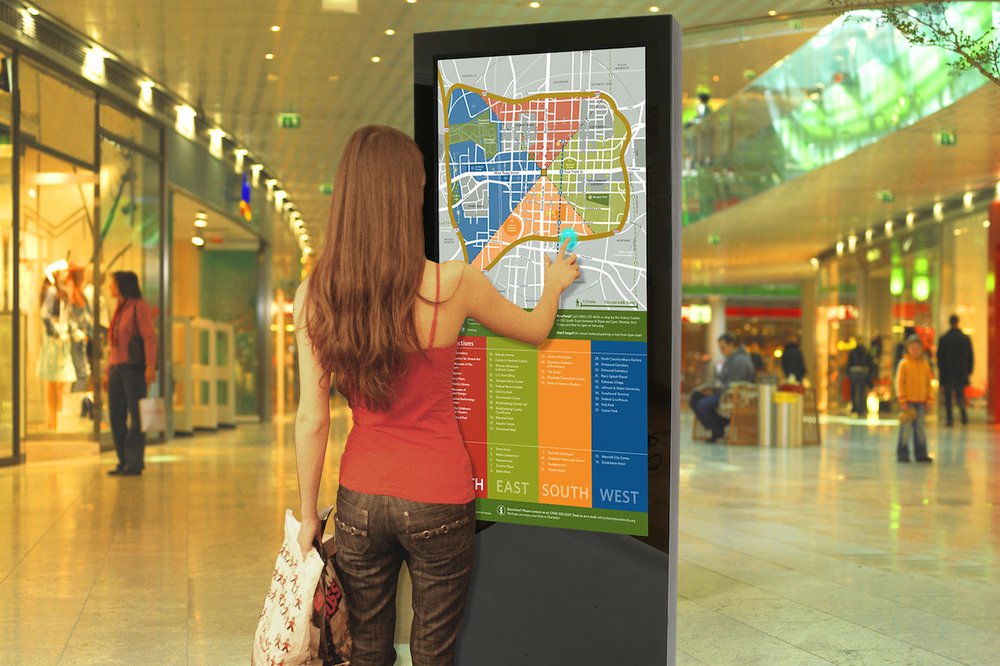 Since then, the Birmingham-based firm has gone on to become a Queen’s Award for Enterprise recipient, while also collecting other respected accreditations.

Baoli, along with seven other UK businesses, will be providing monthly updates as he looks to steer his business through the next year and hit what he has laid out as his "definition of success" after leading his company through the coronavirus pandemic.

You can navigate to different monthly updates from Baoli using the links at the top of this page. He'll be updating on the company's efforts to hit his five top improvement targets. But first, let's find out about the company and Baoli a little more.

In the middle of April 2021, we sat down with Baoli to get a download on where Allsee Technologies currently stood ahead of the new financial year.

Having faced numerous challenges throughout 2021, from issues with Brexit to a dip in sales during lockdown, Baoli was excited to report a strong start to the new year.

Baoli believes there were two general reasons behind the increase in sales. Firstly, March represents the end of tax year for many businesses – which then choose to spend leftover budget – and, secondly, retail businesses in particular were preparing to reopen following months of lockdown.

There had also been some surprises within the figures – one of the reasons behind the boost in sales was due to a major increase in demand from mainland Europe, which had successfully balanced a slight dip in UK figures for the month.

Unfortunately, with much of Europe in a worse place than the UK when it came to managing the pandemic, he expected that the business would see around half as many sales for the next quarter.

Baoli also recognised that there were challenges ahead for the business, not least when it came to the issue surrounding the supply chain and the global central processing unit (CPU) shortage.

Baoli explained that, prior to the CPU shortage, Allsee Technologies had always pre-produced products as much as possible so that there was no need to closely monitor what customers were requesting for the coming months.

“Now, we’re having to ask customers to give us a forecast because we need a clear understanding of their product needs for the next quarter,” he went on.

“We don’t want to over-manufacture one product when another customer might not have enough stock. We're having to talk with customers more to understand what the market really needs; it’s the only way we can make our job easier.”

As a result of the shortage, the cost from suppliers has increased and is still rising, and Baoli reported that other manufacturer costs are rising as well. In the long-term, he didn’t believe that the situation would resolve before June, and felt that the next three months would continue to be a challenge.

Setting the scene and defining success

With all that he and the business have been through during the coronavirus pandemic, we asked Baoli to set a one year from now success statement – a situation the business would be in that would represent both recovery progress and setting it up as well as possible for the future. We then got him to identify the five individual targets that would be most important in making that success statement a reality. See what he set out for Allsee Technologies below. 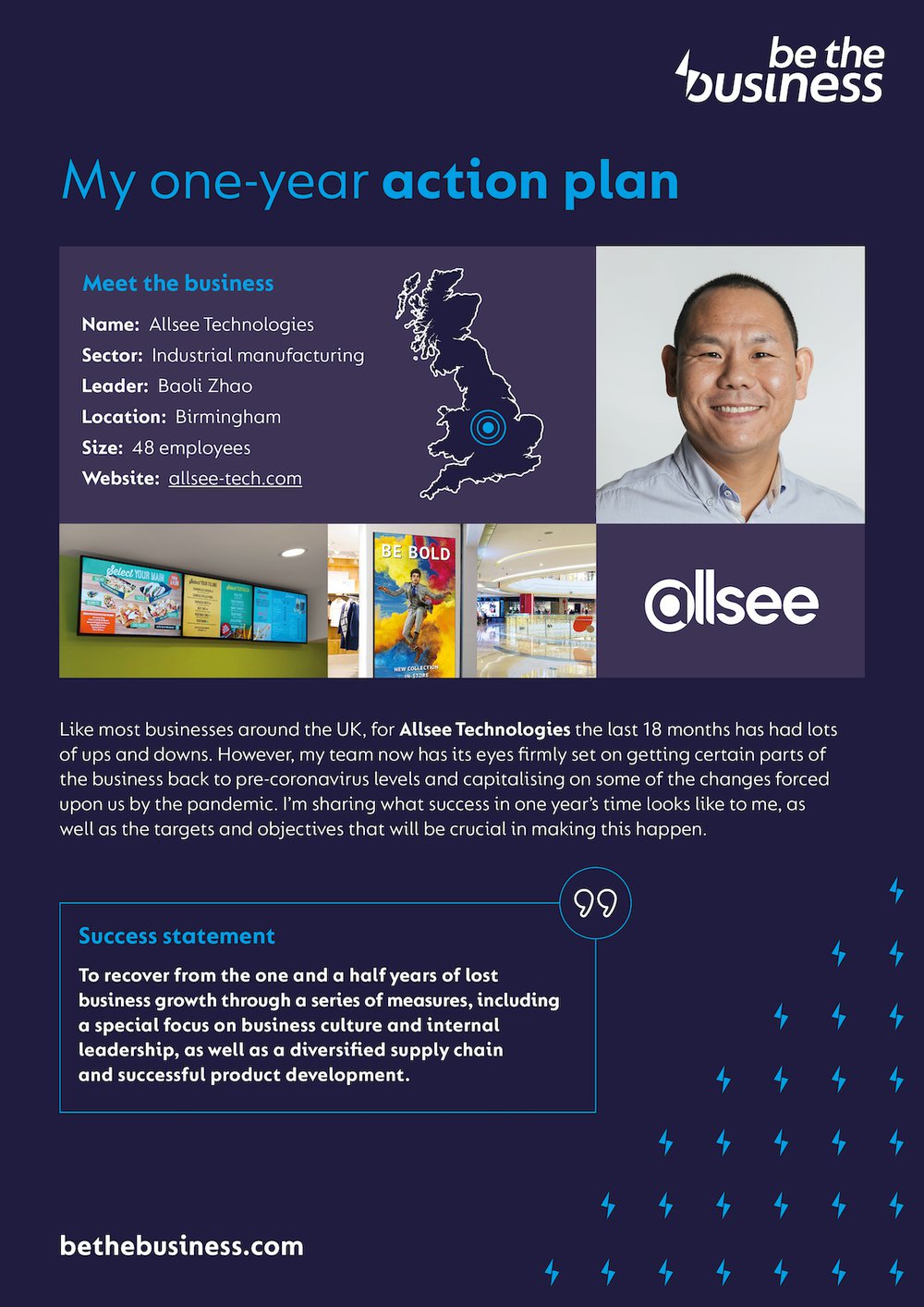 Time for some targets 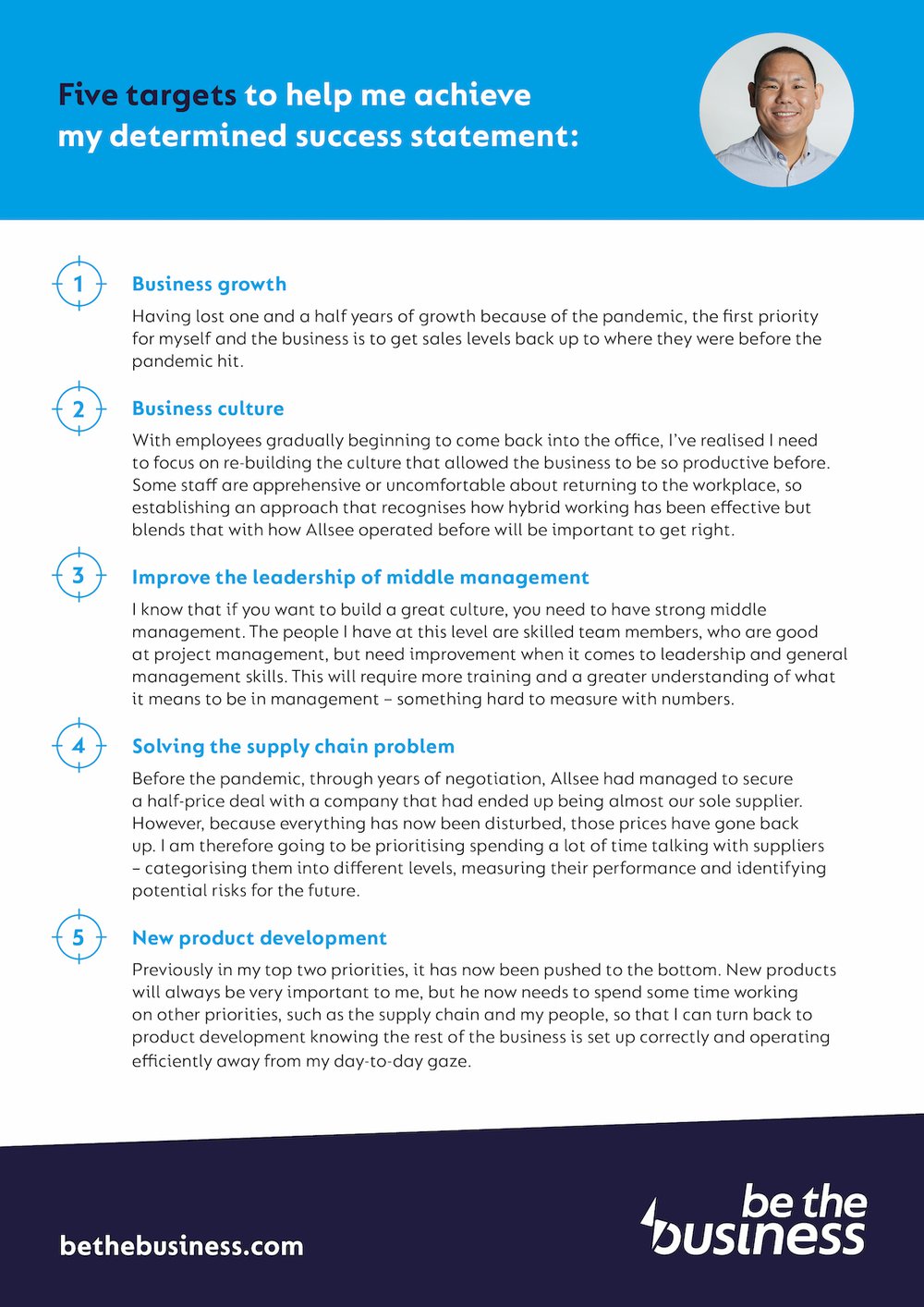 Update one: June 2020 – "We have now defined what our company culture is all about"

Baoli Zhao is already making good progress on some of the targets that he says will help him to achieve his 2021/22 success statement. Here's a short video update from the Allsee Technologies founder.

An introduction to increasing staff engagement and motivation

Start getting your team more involved

Update two: July 2020 – "What's becoming clear is that there are different cultures for different teams – and I am OK with that"

When working out his success statement for 2021/22, drilling down into the culture of his organisation was a key goal for Baoli Zhao, MD and founder of Allsee Technologies. He has an update on this and all four of his other goals right here.

"Lots of updates this month, the first being on business growth, which was number one on our list of five targets to hit that would help us to achieve our success statement. We've just got our first half-year figure, and it's fantastic. We had a 21 per cent growth compared to the first half of 2019, which was pre-coronavirus, and compared to last year it's 36 per cent. Our efforts have paid off.

"The second on my list was to develop the business culture within Allsee: this is an ongoing process, and is something we're all talking about. We have a board full of words that we're asking people to add to so that I can see what our culture means to them. What's becoming clear is that there are different cultures for different teams – and I am OK with that. I don't see how we can have just one culture because each department has a different focus, although the common theme is about teamwork and family.

"Another of my goals is to improve the leadership of middle management. It used to be that I would manage everything, but I am creating a new structure with five middle managers – people who have been promoted from within the team. While they are great workers, very skilled, they haven't had leadership responsibilities before, so we now have to train them and help them understand the meaning of leadership. I am heavily involved in this and I'm passing on what I have learned as a manager. It will take some time because they're all pretty young, but I know it must be working because I now have fewer day-to-day jobs to do.

"As I've mentioned before, our supply chains have been hit by coronavirus. Prices to get a container delivered from the Far East have risen from $2,500 per 40ft container to $15,500. We're getting better at managing the problems within the supply chain and have set up a process where we have regular meetings with our main suppliers to discuss common problems and the future of the market.

"Supply chains are a complex issue and there's a bit of a 'balancing act' involved: we need to balance loyalty with our suppliers with over-dependence – if you become too loyal you risk ending up with just one supplier. But you don't want too many firms competing for your business because you might not be able to get the best parts on a project because they've given them to their most loyal customers.

"Finally, new product development was one of our five goals, and things are going well on that front. Just the other week we launched a new display for shop windows which is our brightest ever panel, ten times brighter than a TV, and it has a second screen that can be seen from inside the store. Hopefully, this will help give us some strong growth over the next few years."

Baoli is thinking about how he can provide most value, are you?

See how your role could evolve
Allsee Technologies

With a company of his size, Baoli knows any change needs to reflect differing personalities, ambitions and resilience

As outlined in his set of targets, Baoli has acknowledged what needs more of his focus and is happy to wait longer to target other areas